You are here: Home / Butchering / How to Butcher a Turkey- Humanely

Disclosure: I may earn money or products from companies mentioned in this post. I only recommend products and services I trust to serve you. Purchasing through an affiliate link comes at no extra cost to you. You can learn more here. 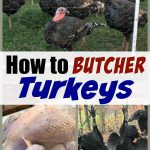 Have you purchased or priced out a locally raised free range non-gmo/soy free turkey for Thanksgiving? Well, they can be a bit on the expensive side. Understandably, it’s a very high quality product but it’s just an expense that we can’t justify.

Several years ago, we decided to start raising our own turkeys for the holidays and just for some good eating at other times of year. We have also raised some to sell which helps offset the cost of raising them for our own family. 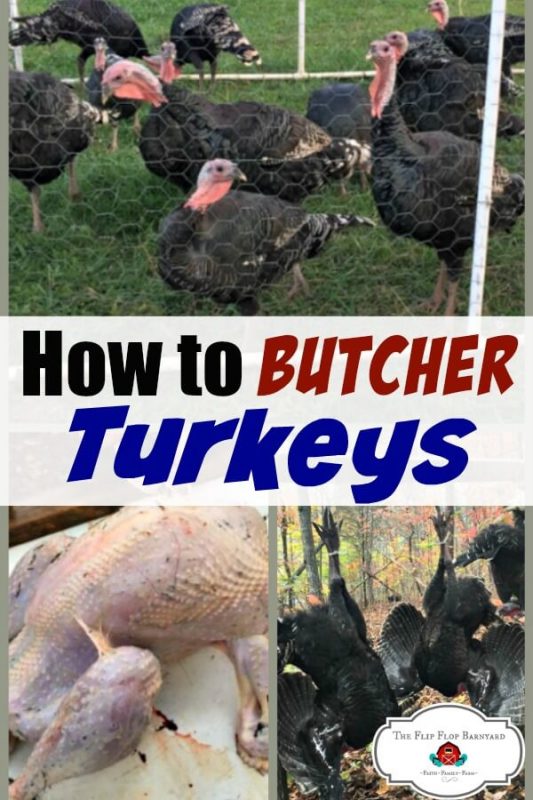 Turkeys really are a joy to raise and are quite good foragers. They still have to be fed some feed, we choose non-gmo/soy free grower feed.

We have tried several options for tractors for the turkeys to move them on pasture as well as free ranging them. I enjoy letting them just free range but they like to go a little further than I want them to.

Butchering a turkey is much like the chicken butchering process, just on a much larger scale.

How to Butcher a Turkey

First we caught several and tied them up by their legs. They are pretty big and heavy but very docile. I’d suggest making some kind of kill cone or using a feed sack with a corner cut out for the head to go through. This will just reduce the amount of flopping as you butcher them.

If you’ve ever butchered any poultry, you know the nervous system causes a lot of flapping and what not during the process. 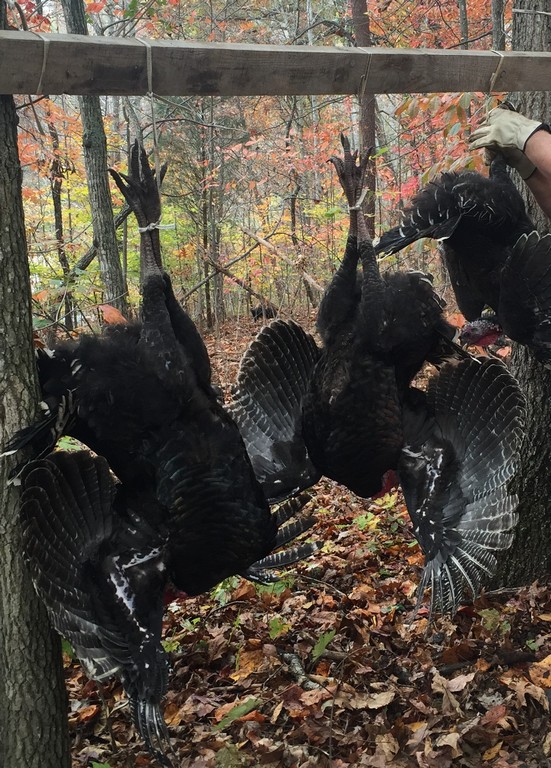 After hanging them up we chose to cut the main artery on either side of the neck. This ensures the bird bleeds out well for cleaner meat and is humane. The nervous system causes them to flop and flap a bit so stay clear until they stop so you don’t get flogged. This is where the kill cones come in if you have them.

Next we scalded them in a drum filled with water over a fire. Scalding causes the feathers to loosen up so that they can be plucked.We regulated the temperature by adding cooler water or stoking the fire depending on what our goal was. Turkeys should be scalded at 145-150 degrees. 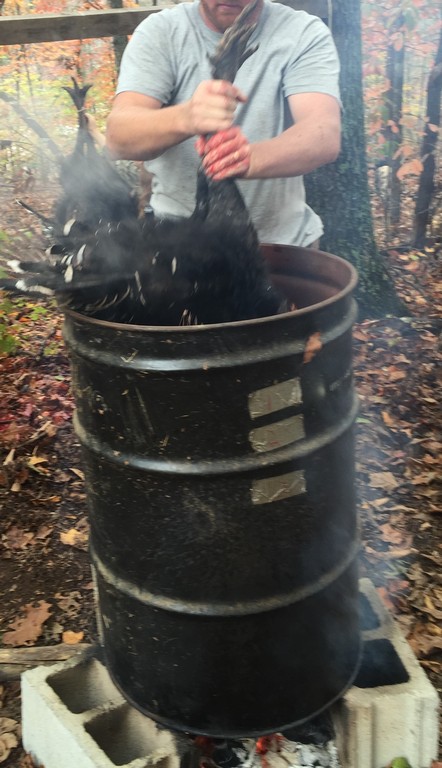 Now that they were scalded we hung them up again by the feet and began plucking. If you have access a chicken plucker that’s large enough for a turkey, they work quite well and are much faster than hand plucking.

Once we had most of the feathers out we moved them to a table for further plucking and cleaning as well as removing the innards, head, and feet. After they were clean we placed them in a chill tank of cold water. 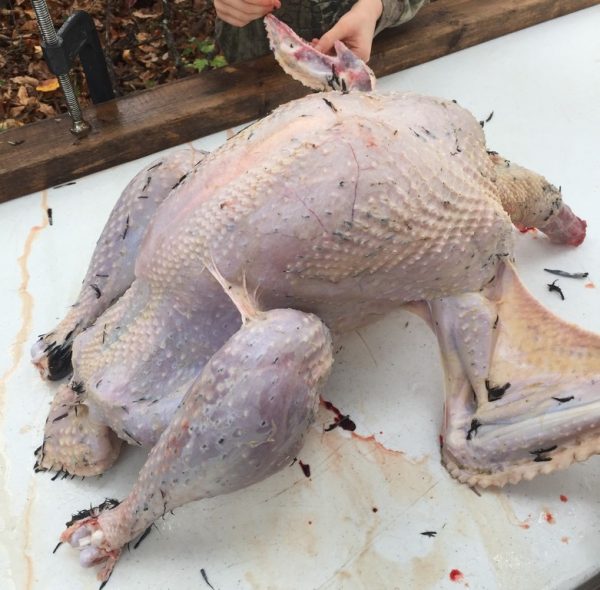 Once the turkeys were all plucked and clean we packaged them in poultry shrink bags. This is done by placing the bird into the bag and dipping it into 180 degree water. and then seal the bag with a twist tie. I don’t have any pictures of this part because I was quite involved in the process.

The turkeys ranged from 12lbs to 21 lbs with most of them being about 17lbs. Now we have beautiful, healthy turkeys ready to freeze, eat, and sell.

It’s really not hard to learn how to butcher a turkey. You’ll be able to raise and butcher a high quality turkey for a fraction of the price of one you can buy. Butchering turkeys at home is a skill that I’m so glad we learned!

Here is our step by step video on how to butcher a turkey (we also use a plucker in the video):

For more on how to butcher a turkey-

A Farmish Kind of Life

The Self Sufficient HomeAcre 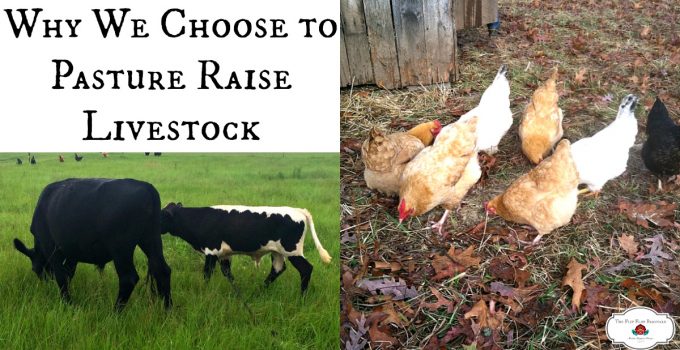 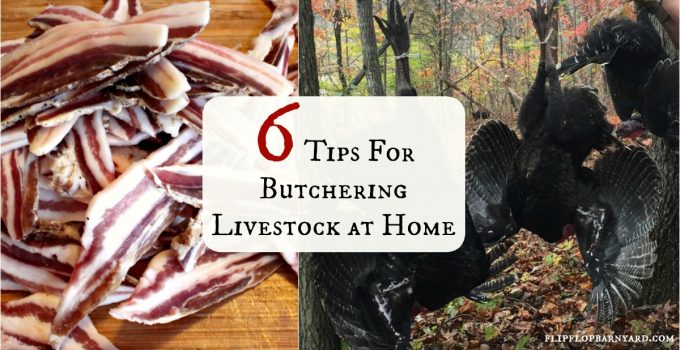 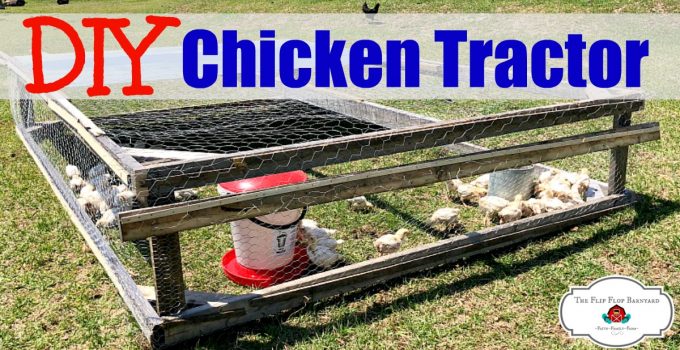 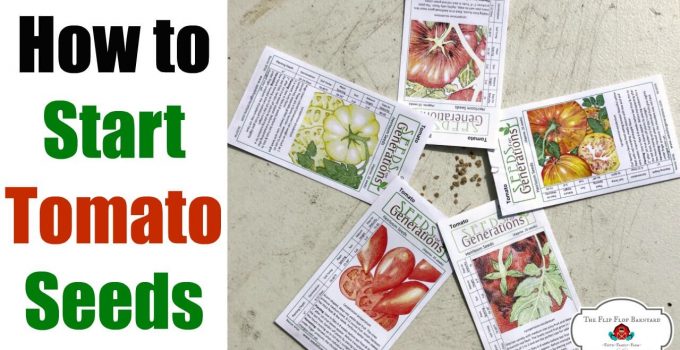 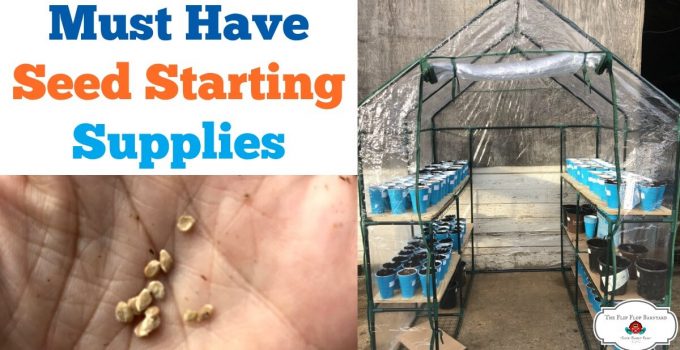